Constitutional court
of the Kyrgyz Republic

Building of the Constitutional court 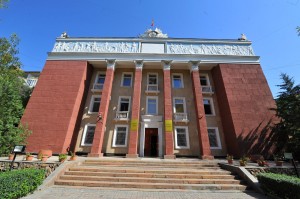 About the building of the Constitutional Court

The building of the Constitutional Court, located at Avenue Erkindik, 39 (Dzerzhinsky Boulevard), was built in 1941, during the Great Patriotic War, according to the project of architect V.V. Veryuzhsky. The architecture of the building is in the spirit of classicism; the synthesis of architecture with monumental art, the facade is symmetrical, the entrance is accentuated by a portico and rich architectural decor is used.

The large sculptural bas-relief “Labor Kyrgyzstan” on the pediment frieze was made in 1940-1942 by the People’s Artist of the USSR Olga Maksimilianovna Manuylova. The frieze of the pediment was the first experience of using bas-relief in the external design of buildings in Kyrgyzstan. The composition of the relief is distinguished by plot and thoughtfulness in construction. On the frieze, the progressive movement of a group of people, consisting of workers, peasants, soldiers, and children, is unfolding.

By the decision of the executive committee of the Frunze City Council of People’s Deputies of the Kirghiz SSR No. 339 dated July 9, 1981 No. 339, the building, as well as the frieze of the pediment “Labor Kyrgyzstan” were recognized as a monument of architecture and art.

By the Decree of the Council of Ministers of the Kyrgyz SSR dated September 13, 1988 No. 331, the building of the Constitutional Court of the Kyrgyz Republic is classified as a monument of the history of culture and art and is under state protection.